In 1888 the Colorado Midland Railroad bought a rotary snowplow from the Leslie Company. The original plow had a nine-foot rotary blade with a shroud 11 feet across that would clear a path wide enough for any Midland equipment. One of the more interesting aspects of the Leslie plow was the car body, which resembled a “greenhouse.” There was a crew area directly behind the blade and impeller wheel for the operators who had a full view out the front and sides thanks to all the windows. The body of the machine covering the steam engine to power the rotary was also lined with windows. One can only imagine all the broken glass that had to be repaired each winter

After a number of years in operation, the Midland decided to rebuild the body of their only rotary snowplow. In 1895 the railway’s shop converted the body of the machine to a more conventional and durable design, which included a minimal number of windows. The plow was numbered “08” until 1900 when the Midland bought a larger 11-foot bladed machine from the Schenectady Locomotive Company. The Leslie plow was renamed “Rotary A” and the new machine was designated “Rotary B,” and both machines survived until abandonment in 1918. The Midland Terminal Railway bought the Leslie machine in 1921, and it served that rail line until its demise in 1949. 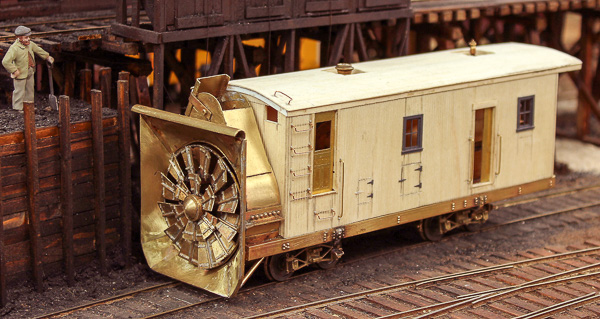 The model represents the Colorado Midland’s Leslie snowplow after its rebuilding in 1895.  Everything on the modeled snowplow is scratch built from sheet brass and bar stock, sheet wood for the sides, and castings for the window and truck side frames.

The front truck of the plow does not include brake shoes due to the accumulation of snow and ice as the machine fought its way through snow drifts that sometime were higher than the machine.

The rear truck does include brake shoes so there is some way to help stop the plow. The roof is made up of individual six inch wide boards covered in tissue paper with holes in the roof for the smoke stack and the steam dome with its relief valves and whistle. (Building the tender is the next order of business.) 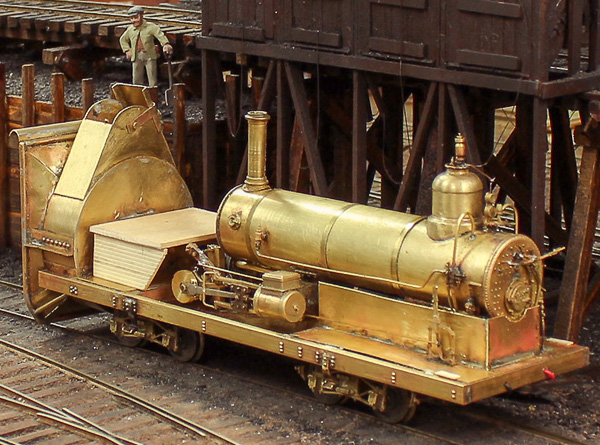 Looking at the model from the rear with the car body removed, one can see all the workings that make the blade turn. (There is a motor under the boiler and all the mechanisms work, even producing a breeze out the exhaust chute.) While some detail work remains, the wood platform is for the operator to supervise the movement and speed of the plowing operation.  He is also, and equally important, tasked with the responsibility to set the exhaust shroud for throwing the snow out to the left or right side of the train. The cylinders are set in a reverse position so they can power the blade through a set of gears. Due to blowing snow, shrouding had to be used to surround most of the boiler and the firebox to keep the working area as clean as possible. It would take at least a two-man crew to operate the boiler with its “Johnson Bar,” injectors, and to shovel coal. But, one of the most important jobs would be to operate the whistle, which was the means of communications between the plow operator up front and the crews in the four or five locomotives pushing from behind the snowplow’s tender.