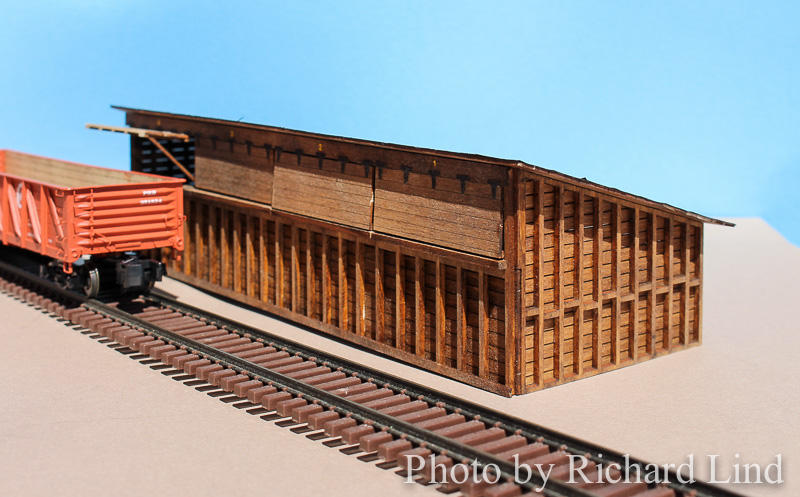 Today, when we see coal moving by rail it’s usually in 100-ton hoppers or 100-ton gondolas with rotary couplers. But in the transition era, coal moved in 50 or 70-ton hoppers and 50-ton 40-foot gondolas. In fact, about 30 percent of coal mine production in the Midwest moved in gondolas. So why were they using gondolas? The answer lies with the coal merchants who ordered a carload of coal and didn’t have enough business to justify the expense of building facilities that could accommodate hoppers. They often had a simple shed and the gondolas were shoveled out by hand.

Now you can get a laser-cut kit for one of these sheds in HO. Hidden River Model’s HRM-38 Coal Facility has a footprint of three inches by seven and a half inches. The HRM kit comes in a 4 mil clear plastic bag. It includes black paper cut in strips for roll roofing and hinges that are also cut from black paper. The shed has plank walls and when you hold them up to the light, you see daylight between them all. The underside of the roof sheets are scribed to represent roof boards and they are also scribed to show thelocation of each rafter and partition frame. None of the sheets are self-adhesive and there are no corner tabs, nor should there be. Parts are identified on the carrier sheet and door braces and hinges are spaced for you so you can glue them on as a unit. There are three pages of instructions. A general instruction sheet that applies to all HRM kits, a sheet with an isometric exploded view of the kit’s construction, and a sheet of instructions written specifically for this kit.

I built this kit in S scale and it went together without any problems, following HRM’s instructions.  I have a few tips.

Now I have a common line-side industry and a destination for my forty-foot gons.